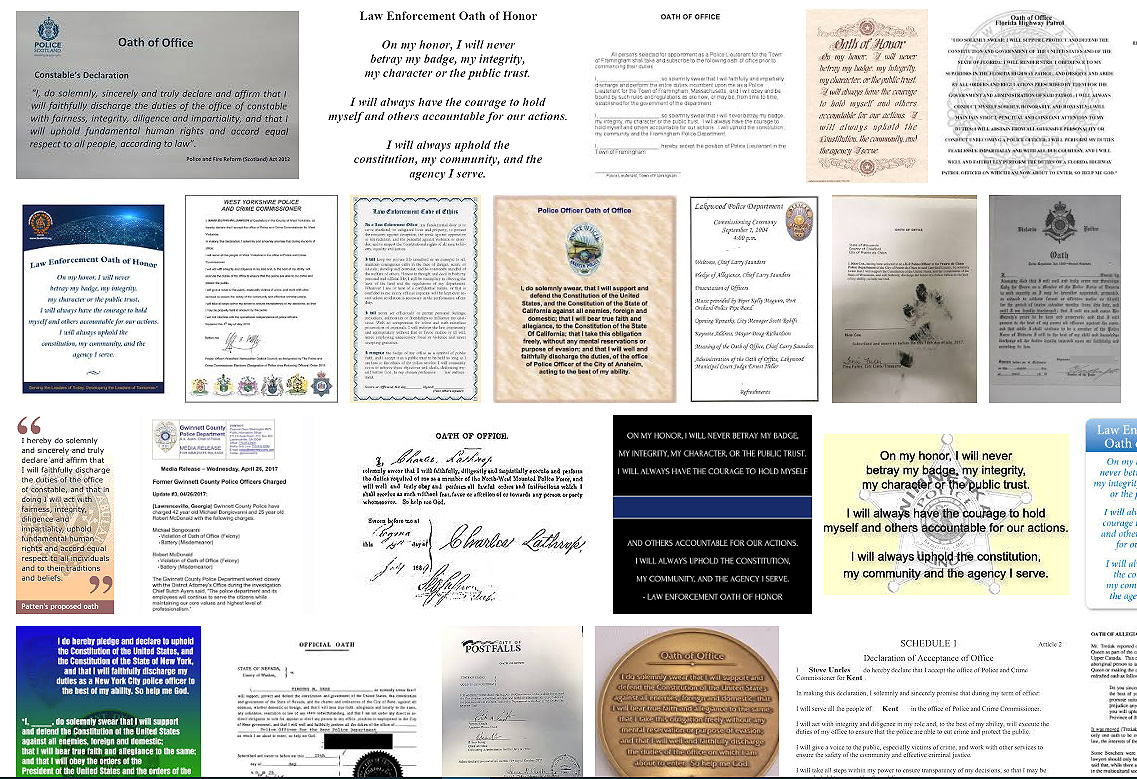 All police officers are required to take an oath of office, a ritual that goes back beyond the beginning of modern policing. The basic text has remained remarkably consistent throughout the western world. The oath is considered necessary due to the enormous power and trust society bestows upon those holding the position.

Historically all oaths invoke the wrath of a deity as an obvious intent to reassure the public that those who abuse such power will ultimately be held accountable — but to be effective, that fear of accountability has to be shared by both sides and couched in a more terrestrial realm.

The reality of human kind is that we all would like the assurance that God is on our side. It would be comforting to open a Bible and see Canada named as the ‘Promised Land’ and even nicer if it gave real reasons to support a political party of our own liking.

Unfortunately the Bible is said to have been written by human hands and inspired by divine intervention, and so is open to interpretations that far outweigh the bulk of its text. So whose side is God on anyway?

Since the dawn of humankind, the thought of a superior being or force has been central to the theme of human endeavour. History has shown us there’s no greater folly or fortune than humans characterizing a nationalistic or political agenda as “God’s will.”

Examples of this abound. Both sides in the American civil war were urged onward with assurances by their political masters that God was indeed on their side. Today we see the Arab world battles between  Shia and Sunni sects as prime examples of this phenomenon.  Of course, with the victor goes the ‘truth’ of their claims because in their view God could never be on the side of the loser.

Napoleon, Kaiser Willhelm, Hitler, Bin Laden, and Saddam Hussein are all examples of losers in the game of Godsmanship. Why? Because they lost the right to claim God’s favor by first claiming it and then losing the war; sort of a trial by torture process that in reality brutalizes both sides.

“The problem we all have as police officers in dealing with the power inherent in our jobs is, how do we use the power wisely?” asked Edward Tulley in a Blue Line Magazine editorial several years ago. “All too often we use it without thinking of the consequences of our acts. We have a tendency to believe that since we have power, we are above the law! At times we think we are doing God’s work and the means we use to reach a desirable end-product are justified.”

A revelation in doing my job as a cop was clarified for me by reading Romans 13 (verses 2 to 5) in a version of the Bible called The Way. It was published by Youth for Christ International in 1972 and puts the Bible in contemporary modern English and has ever since brought it to life for me:

“So those who refuse to obey the laws of the land are refusing to obey God and punishment will follow. For the policeman does not frighten people who are doing right; but those doing evil will always fear him. So if you don’t want to be afraid, keep the laws and you will get along well. The policeman is sent by God to help you. But if you are doing something wrong, of course you should be afraid, for he will have you punished. He is sent by God for that very purpose. Obey the laws then, for two reasons: first, to keep from being punished, and second, just because you know you should.”

Since first reading this over 40 years ago, I have concluded that it can do much good but also much harm. My first error was to consider it a message to me and all police officers that what we’re doing is divinely inspired. I’ve since realized that although the profession can take some solace from it, there’s no direct support for all police actions.

The message in Romans 13 is one of simplicity directed at every citizen, police officers included. If you agree to live together in any form of harmony, then you must conform to some rules of behaviour. Police and citizen alike must obey the laws of the land, but more so police, because they have taken a solemn promise that they will uphold the law. Citizens must do so only by default when they accept membership in a society with rules.

Today’s realities have degraded the power of God’s word to many people, in part, because of too many years of abuse by authority figures in positions of “trust.” It could be a feeling that the Bible lacks relevancy in everyday life. Perhaps it’s time we take a second look at the oath of office and consider the mind set of each individual we ask to take it.

First and foremost, we should ask pressing questions about each candidate’s faith and values and perhaps customize the oath to conform more to them. In many cases we could be thrusting a bible into the hands of someone who feels it has no relevancy to what they are doing.

As I mentioned in a previous comment about drivers licences perhaps police officers would benefit from a fortified promise or self designed mission statement written by them after training is completed. This statement could be placed on the back of their warrant card as a reminder. This could be far more relevant to many officers than an oath of office.

In the mean time I would draw your attention to the Police Service of Northern Ireland. Wracked by sectarian violence for over 80 years they determined that a new police service style was in order. In doing so they sought out the advice of many other police entities around the world. Canada’s own Robert Lunney was one of several who worked with the new fledgling agency.

One of the many changes included ensureing that 50 per cent of the agency’s makeup be Catholic. The centre-piece change, however, was the instituting of a new non-sectarian oath of office that did not invoke the wrath of a deity to keep the officers grounded to their work. I think it is one of the best devised oaths of office yet conceived;

“I hereby do solemnly and sincerely and truly declare and affirm that I will faithfully discharge the duties of the office of constable, and that in so doing I will act with fairness, integrity, diligence and impartiality, uphold fundamental human rights and accord equal respect to all individuals and to their traditions and beliefs.”

I leave the last words to Tulley. “The vast majority of law enforcement officers are honourable persons and their reward is peace of mind, self respect and satisfaction that their work made this country a better place to live. That is a pretty good legacy to leave your sons and daughters!”